Guess which leg was stung by a nest of yellow-jackets while mowing the lawn?
Posted by Jimmy at 9:56 AM 3 comments:

Best 14 Minutes Investment you can Make!

Everybody always say's if you want to get better you have to train with people a lot better than you. I have definitely accomplished this over the past two weekends. As you might recall, last weekend I trained with two sub-12 hour Ironmen, which 1 was a Kona-alumni. This weekend, I trained with the most impressive line up of cyclist I could even think about. I should note, that although it was grueling beyond belief - I had a ton of fun.

One guy has climbed on Mt. Ranier, one guy just finished the Cohutta 100, in which Floyd Landis was there and the other guy has done the bike and run on the Leadville 100 UltraMarathon and the Leadville 100 MTB. Interestingly enough, Memphis, TN (voted as the WORST city to ride a bike by Bicycling Magazine) was our common denominator - as we have all lived there at one point in our lives.

I started earlier than the others knocking out a painful 25 minute swim. Painful, not because of the distance, but because of the absolute boredom of swimming by yourself at 7:00 on a Saturday Morning.

I then met up with my fellow cyclist as we started our assault on the prevailing Mountains. I knew everyone was going to be climbing faster than me because they were 1)better cyclist, 2) I think everyone had a smaller lower ring and 3) they were better cyclist. So I started to coast a little bit in the straights in my aero-bars. I received the appropriate amount of harassment for being "aero" so I succumbed to the peer pressure and just gave up. We talked throughout the whole ride, which was great, because they all had awesome stories from canoing down a river in Memphis in December and falling out and almost drowning to being slammed face first into a tree while barreling down a hill mountain biking.

After playing around in the flat's it was time to climb, we soon approached Raccoon Mountain. I had never climbed the eastern side before. It was easier to get to compared to the western side, but the climb was just as grueling as there were no switchbacks. I popped in some caffeinated gel and some gatorade, but I was still bringing up the rear and was left in my fellow riders dust. Fortunately for me, they waited for me on the other side after a fun downhill ride.

I actually did pretty well, for me at least, in the flat sections, from Raccoon Mountain to Lookout Mountain. At one point, I almost felt like I was in a movie, as this area was absolutely gorgeous with the morning dew still on the grass, and the sun peeking over the mountain shedding just enough light onto the respective farms. We took a little break to see some hang-gliders take-off and to catch our breath from sprinting away from some incest, redneck dogs. Then it was Lookout Mountain. Not just Lookout, but the Burkhalter Gap climb of Lookout Mountain. I was again, left in the dust, but they waited at the top. At the top of Lookout were some rollers on a nice loop. Usually, these would be fun to ride on, but to be honest, they were zapping energy from me that I didn't even know I had. It was gorgeous on top of the mountain though.

Usually I'm the fastest guy down the mountain, but not in this group. They AGAIN, left me in the dust (are we noticing a pattern here?), but I had fun. We had a fun ride in to downtown where everybody went home. I threw out an invitation to go running, but I think everyone else was pretty hungry. I think I ate a lot more than everyone else.

When I got home I was excited thinking I was going to get to run with my little girl for the first time, but much to my chagrin she was sleeping and Mom was busy around the house. So I just parked the bike and took off running. My wife looked at me like I was about to die, as she repeated several times: "are you sure you want to go running?" I only ran around 3 miles at a very slow pace, but my heart-rate was still elevated, so I was feeling good about it.

The rest of the weekend was spent hanging out with my in-laws eating some great food and having a good time with family.
Posted by Jimmy at 5:56 AM No comments:

My HRM kicks complete butt. I flew up the mountain yesterday, faster than I ever had before. Instead of worrying about how fast I'm going, and what gear I'm in, I'm only worried about 1 thing, the number on my wrist.

My buddy Chad told me to try to keep it above 180 for short-distances. I didn't get there, but I was keeping it above 170 for the whole climb. I was so focused I forgot to drink water until I got home.

I can't wait to see how it all goes this weekend.
Posted by Jimmy at 6:01 AM No comments:

Training with a Heart 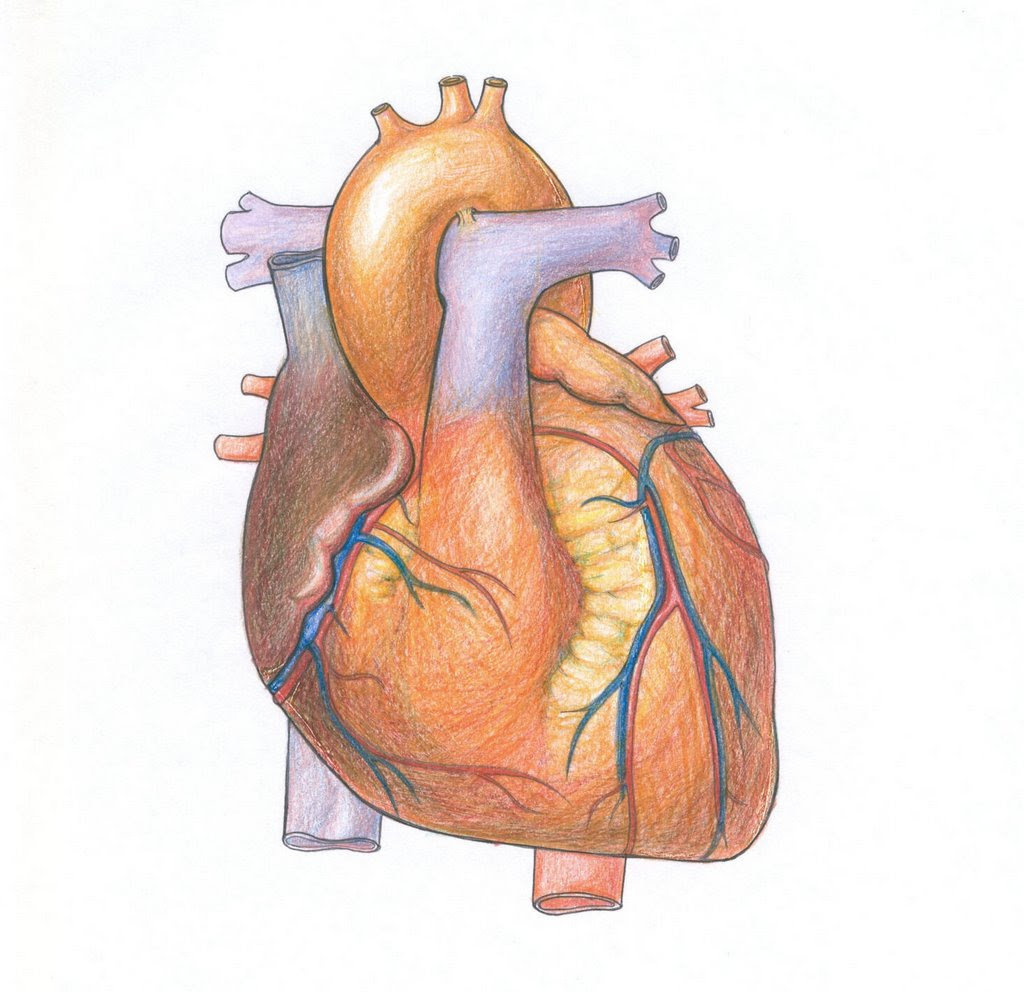 Training continues to go well. Yesterday, I did some hard time-trial sprints and was really stoked to see that my wife and daughter bought me a hear-rate monitor for me for Fathers Day. So I immediately strapped it on and went for a run. I think it will definitely help.

Today, I'm using the HRM when I climb Lookout Mountain, so I'm excited about what I can crank it up to!

I hope everyone is enjoying the great weather down south.
Posted by Jimmy at 1:11 PM No comments:

Per Request, I guess I will spill the beans on running through wet cement.

Most of you know I'm a dreamer. In 4th grade my teacher made my mom pay for a special test to see if I had a learning disorder "because all Jimmy does in class, all day long, is dream." (FYI, I did grow up in Memphis, so it's not like I was really excited about my current environment)
Now I could write a book filled with successfull people that are dreamers, and the problems with current academia, in not allowing dreaming, but I will digress.

I say all of this just to preface this embarrasing story. I met a friend for lunch downtown. After lunch, I'm just walking along the sidewalk, dreaming of-course, and all of a sudden, I find myself sinking. Ugh? I look down and I am right in the middle of a freshly poured wet sidewalk. That's right - no signs, no barriers, nobody around, just me - ankle deep - in the middle of a freshly poured sidewalk. I immediately kicked up my legs and started to run through it. I'm not talking about a touch-up job. I'm talking about a whole, freaking sidewalk, about 20 ft of wet cement sidewalk. Why did I not just hop to the side of the street? Because I'm a MAN, and that would have been the logical thing to do. Now I get to tell this really embarrassing story on my blog! That's why!

A couple of years ago, I had a temper problem and would probably have tried to bury a construction worker in the cement. Now, I just busted out laughing and immediately called my wife to tell her. Unfortunately, I was a solid 1 mile away from my office - and yes, to state the obvious - wet cement - turns to hard concrete fairly quickly, and as such, turns fairly heavy. Needless to say, my knees were wondering what was going on.

My wife came to my rescue and brought me new shoes at work. She of course had to capture a shot. 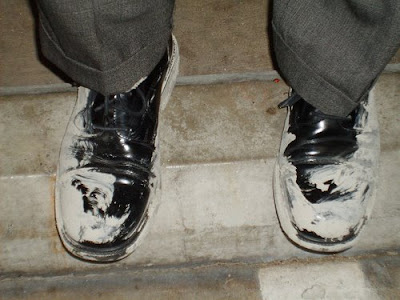 I had some great training this past weekend. My alarm didn't go off (AGAIN!) so I missed out on swimming, but did get in a 90-mile bike ride that was gorgeous. I finished it off with a couple of miles of running.

I started the bike with some true hard-core triathlete's. You know you are riding outside of your comfort zone when 1 guy was describing a little hill on the left (which turns out was Lookout Mountain) and the other guy qualified and participated in the Ironman World Championships in Kona! These pics are from Cloudland Canyon State Park in Georgia.

Well a lot has happened in the 10 days that I have not posted.

I ran through wet cement.

I discovered one of the most beautiful routes in Chattanooga (yes, part of the reason it is so gorgeous is it is "flat" with "rolling hills"

We had a record turn-out for Bike 2 Work in Chattanooga.

I finally feel confident in the water.